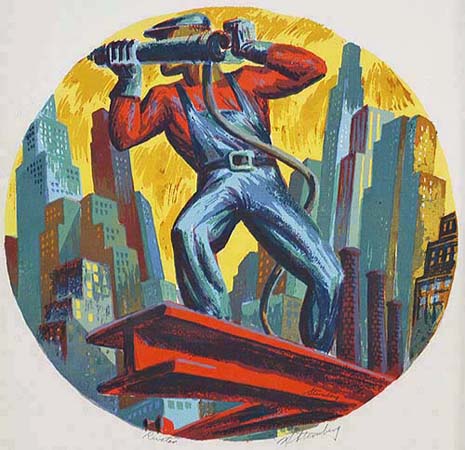 Screenprint, 1935, Moore 126, edition unknown. 11 3/8 in. in diameter. Signed and titled in pencil. Signed in the image in ink. This is a superb impression with the printed surface in pristine condition. The paper is watermarked "MANSFIELD, vellum finish" and the margins are wide but slightly uneven. (There is a repair in the upper right corner of the sheet well away from the image.) This very rare work was done in New York and it's a iconic image for American printmaking during the 1930s. Sternberg produced an etched version of the same subject as well as a lithographic version which is slightly different in conception. This exceptional print is on the cover of American Screenprints by Reba and Dave Williams, 1987, published by the National Academy of Design. Impressions are in the Cincinnati Art Museum, the Davis Museum at Wellesley College, and the National Gallery of Art.       SOLD