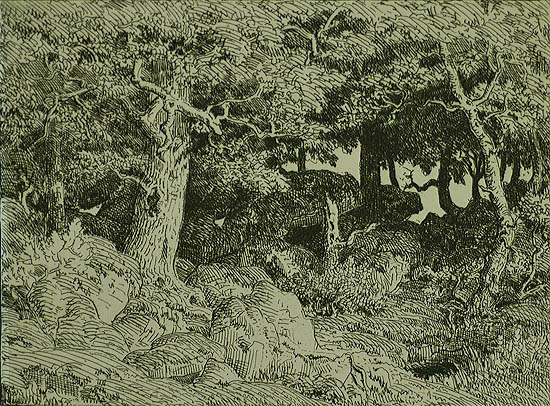 Etching, 1861, Melot R4 (iii/III), edition unknown. 5 1/2 x 8 1/4 in. Signed and dated in the plate, lower right. This is a fine impression printed on a cream-colored chine appliqué. The margins are full and the condition is very good apart from being slightly light struck within an earlier mat opening. Rousseau produced only four etchings and this is the most common as it appears here; the third state as published in the Gazette des Beaux Arts in 1861. Early state impressions are very rare and the letters of the third state are occasionally found masked or roughed out to present the appearance of a first state. Rousseau exhibited the painting of the same subject in the Salon of 1861. This is a fine example of Barbizon printmaking at an affordable price.      SOLD