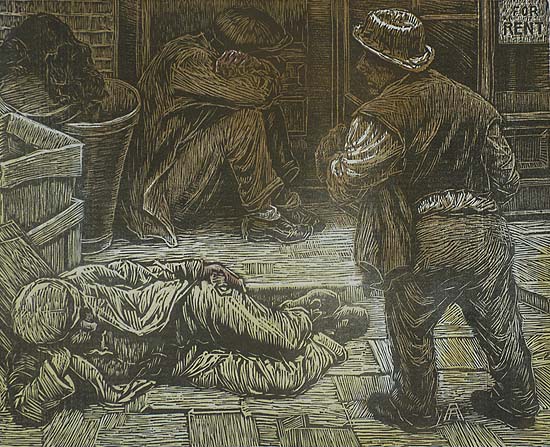 Woodcut (linocut?) printed in colors, circa 1937, edition probably about 25 impressions. 13 7/8 x 17 in. Initialed in the block and signed and titled in pencil. This is a fine impression of this large, rare print. Printed on a thin Japanese paper, the margins are full and the condition is very good. (There's a trace of wrinkling in the lower margin just to the image.) Abramovitz was born in Riga, Latvia, studied in Paris, and eventually settled in New York where he was employed by the WPA program. His work is illustrated and discussed in The Federal Art Project: American Prints from the 1930s (1985), published by the University of Michigan Museum of Art. His prints are in the following American collections: Art Institute of Chicago, Baltimore Museum of Art, Newark Museum, Philadelphia Museum of Art and others. This potent, expressionist image is an outstanding example of his work and a bold social statement about life for many during the 1930s.      SOLD