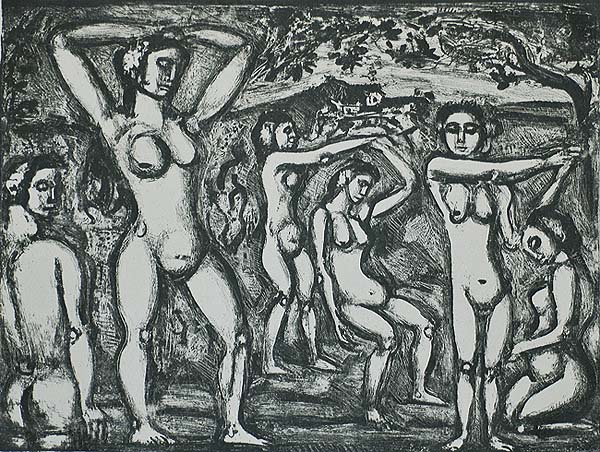 Lithograph, 1927-1933, Chapon/Rouault 364 viii/XII, Wofsy 59, edition of 60 in this state. 17 1/4 x 22 5/8 in. Signed and dated on the stone, lower right. Signed, dated and titled in ink below, "Automne - 2e tirage - 1933 - Georges Rouault." This is a fine impression with rich contrasts. The paper is a heavy wove with full margins. The condition is fine. Chapon/Rouault lists twelve states, with all states printed in 1933. They have ten states described by the artist, followed by an "Etat definitif" (the final state) but with an intermediate state between the 5th and 6th, making a total of twelve states. There was an edition of 60 printed in the 8th state (actually the 9th state), listed as "Deuxieme tirage," while the final state is described as the "troisieme tirage," with an edition listed of 175 impressions. Of all the other states, there were just a few proofs printed. This large, impressive work is an outstanding example of his printmaking. There's also an intaglio version of this subject with is very similar.      SOLD