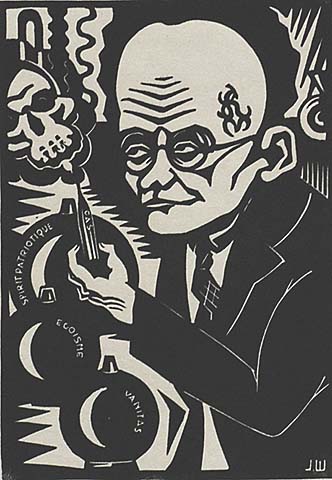 Woodcut (or linoleum cut), 1933, edition unknown 6 3/4 x 4 3/4 in. Signed in the block and signed and titled in pencil. This is a very good impression with wide margins. The condition is fine. Wils studied engraving at the Academy in Antwerp where he was a student of Brocas. His main focus from 1932 on was engraving and he founded the magazine Jeugdland (1937-40). He was held captive by the Germans during the first part of WWII. The potent antiwar sentiment of this expressionist image is most compelling. From his series called "Grotesken."       SOLD