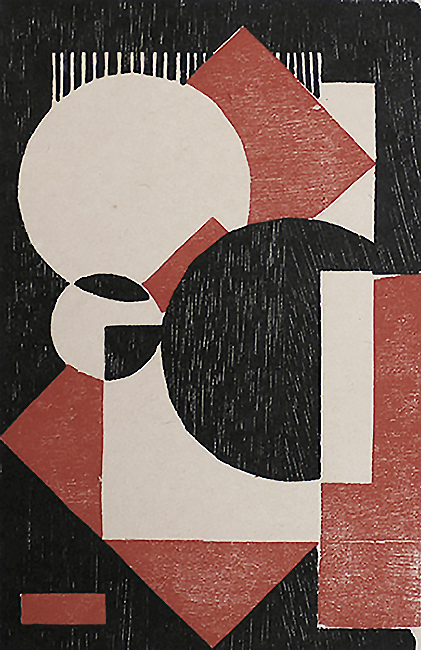 Woodcut printed in colors, 1925, Bool / Petersen G31, edition 40. 6 x 3 7/8 in. Signed dated and titled in pencil. This is a fine impression printed on cream wove paper. The margins are full. The condition is very good apart from slight light toning within a previous mat opening. This important woodcut is from the 1976 edition of 40 impresssion printed by Emile Puettmann for the deluxe edition of "Wobbe Alkema, Lino et Houtsneden 1923-1927." Early impressions of Alkema woodcuts are exceedingly rare as they were not formally editioned. This print is featured on the cover of Adriaan Venema's landmark book, "De Ploeg 1918-1930,"(1978). Alkema was originally trained as a cabinetmaker and he eventually worked with an architectural firm in Groningen. He joined De Ploeg and produced many remarkable works of geometric abstraction in painting as well as printmaking. His paintings from the 1920s are important today and his prints are equally desirable. Alkema was also associated with the Belgian Constructivists including Jozef Peeters and the writer, Paul van Ostaijen.       SOLD