The Beggars - JAMES A. MCNEILL WHISTLER 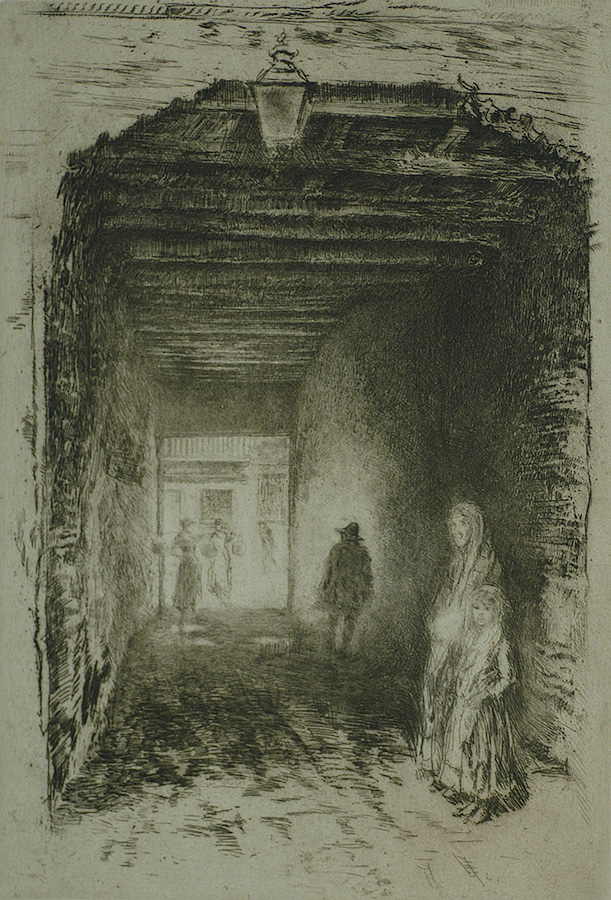 Etching and drypoint, 1879-1880, Kenedy 194 (ix/IX), Glasgow 190 (xvii/XVII); 57 known impressions cited in Glasgow. 12 x 8 1/4 in. Unsigned. This is a very fine, dramatic impression printed in 1903 by Frederick Goulding. The paper is a cream, fine laid with a strasbourg lily watermark. The margins appear to be full and untrimmed. "The Beggars" is from Whistler's First Venice Set (A Series of Twelve Etchings). The Glasgow online catalogue of Whistler's etchings does a remarkable job sorting through the seventeen described states which is considerably more than the nine listed by Kennedy. Frederick Goulding, the master printed, was asked to fill out the edition of this print not long after Whistler died. (Goulding printed 22 proofs to complete the project.) Our impression is inscribed on the verso in ink, "F. Goulding, Printer, Nov. 27, 1903." The Glasgow catalogue states, "These last proofs, closely modelled on Whistler's, are fine examples of Goulding's work, dramatic in their use of ink tone to enhance the etched lines. They show the plates had survived in fine condition, and draw to an end the epic history of Whistler's Beggars." The plate was subsequently cancelled.      SOLD