Portrait of the Artist as Ulenspiegel - VICTOR DELHEZ 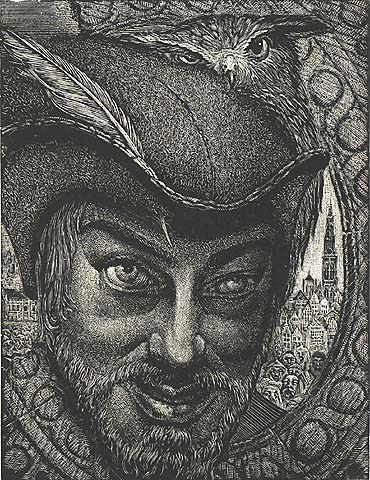 Wood engraving, undated, Small edition. 12 x 9 in. Signed and titled in pencil. Inscribed "epreuve d'artiste." The character "Thyl Ulenspiegel" is well-known in Flemish folklore. He is a person who tells the truth in the form of a joke, holding a mirror to the people. The first appearance of Ulenspiegel has its origins in the Middle Ages. But the most famous one is the 19th century novel by Charles de Coster, written in French, a book that was considered revolutionary at the time. Ulenspiegel is, in this book, a young Protestant fighting the Spanish rulers and the Roman Catholic Church. This was a favorite book of the artist. Telling the "truth" in a hidden form pleased Delhez very much.      SOLD