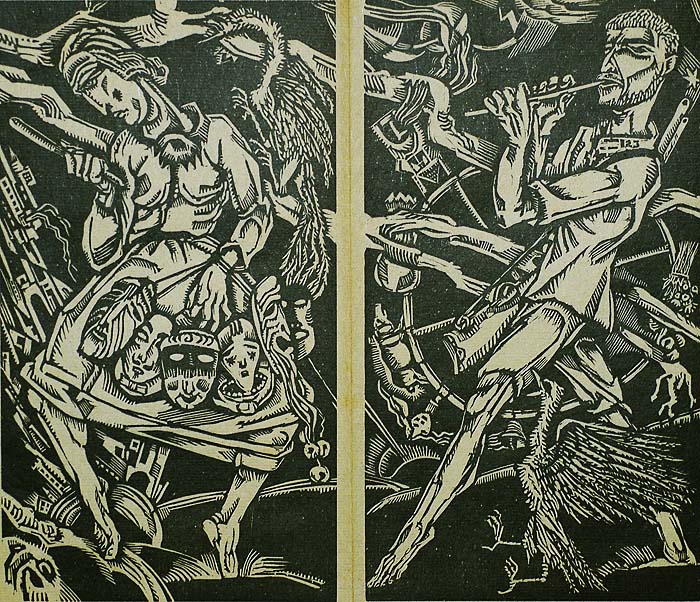 Woodcuts, 1924, edition 200. each woodcut 10 3/4 x 6. Signed in red ink with the artist's monogram on the left and signed in pencil, lower right. This set of seven woodcuts (plus title page) consists of fine, uniform impressions in very good condition. The margins are full as issued. This masterful Belgian expressionist work is printed on one sheet of Toshi paper and presented in an accordian fold, with the original presentation wrapper. Eekman was born in Brussels and settled in Paris in 1920. He exhibited widely in Europe and was quite friendly with Mondrian and Signac. He was very active as a painter and woodblock artist and also showed his prints in Pittsburgh, Los Angeles, Toronto and Chicago. (There's a wonderful web site which has been organized by the artist's daughter, Luce: nicolaseekman.com.) As seen in the work of Henri van Straten, Victor Delhez and Nicolas Eekman, among others, a macabre and thoroughly captivating sense of humor often pervades Belgian aesthetics during the 1920s and 1930s. James Ensor is best known and certainly an early inspiration, but there were many other printmakers whose work stands out. This is particulary evident in the woodcut medium and Eekman's version of "danse macabre" is exemplary.      $1,750